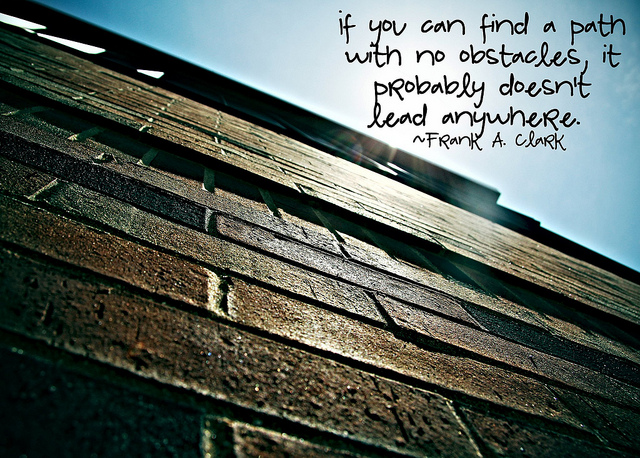 Many people feel stuck in their lives and blame their stuck state on something external to them that “causes” them to feel stuck. That something can be arbitrary, such as “unhappy childhood”, an “unpleasant event”, a sense of incapability or any other “obstacle” that is seen as external to oneself.  It feels bad and it feels real. It is so real sometimes that the entire moment right now is defined by the block.  That block becomes huge and impenetrable.

Entire “therapeutic” careers have been built upon trying to find the best method to eliminate these external blocks. The effort has largely been futile. Why? Because these obstacles do not exist outside one’s mind.

The problem has been, focusing on these blocks, whether real or unreal reinforces these blocks, and makes them more real and more impossible to overcome. New meanings are added by virtue of human memory being only a process of recreating, which requires filling the inevitable blanks. The possibilities for what to fill these blanks with becomes exciting, very exciting, sometimes all consuming.

Even if one does not remember the details of the unhappy childhood, for example, these real or unreal details become evident. The mind is very creative when it comes to designing things. The movies of the mind are not any different from the movies on the large screen, except they required an additional step; hiring actors and filming on the location. Whatever is being filmed is a direct reflection of the movie of the mind.  Recreating bad memories takes skill and purpose – to feel bad. One may tell you they cannot stop themselves from remembering. What they are inherently saying, “I became an absolute expert at bringing certain pictures and certain sounds into my direct awareness”. The fact they perform certain internal actions to bring those things into direct awareness is great news as it shows they can easily change the process. It is possible to reverse movies, slow down the sounds and change the sequences of scenes. Most people are under an illusion there is only one way to do things inside their mind when it comes to remembering stuff.

GET PAST YOUR OBSTACLES | Live With Power

When we think of these internal movie making as being the platform for decisions we make and the realities we project, the whole idea of a “problem” becomes something different.

GET PAST YOUR LIFE OBSTACLES

“It takes adequate planning to feel bad” takes on a whole new meaning.  Creating a movie of the mind is a process. It takes creating images, mixing colors, inviting actors into the internal set, ascribing personality traits and deciding on the outcomes. The moment that movie is finished, one steps into it and takes on the role of the main character. After that, the movie is being replayed on a continuous basis via a well – designed replay mechanism.

One suddenly feels “bad” and often becomes attached not only to feeling “bad” which becomes comfortably familiar, but also to one’s role as a “sufferer”. That role is rewarding at times. There is a vast supply of attention that spells “significance”, opportunities to get therapy and other bonuses. There are rewards in feeling bad. Suddenly feeling “bad” is a new “good”.

When one wants to make the change and start feeling different, one must release the attachment to the rewards inherent in feeling “bad” and change the script of the mind. These changes can be made on every level; changing the outcome, changing the set, changing the characters, removing oneself from the main role, creating a different script and artistic rendition.

Sometimes it also takes a decision the yesterday’s problem is as relevant as the burger one consumed yesterday. If it was a bad burger and caused indigestion, these are the only real facts. Reminiscing about the burger and recreating the original indigestion is a different situation.  The decision to choose either alternative remains with you. One thing is sure, you are the director of your movie and you have always been the main character. The question is what movie you want to play and what role do you want to assume. The rest is just technicalities. Choose wisely.

“Knowledge becomes more powerful when you share it. When shared it opens the door to progress and achievement.”